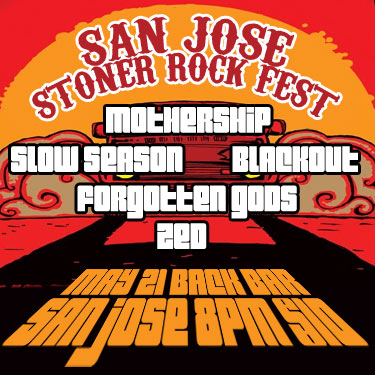 Top Stoner Rock acts from around the country will converge in the South Bay on Thursday May 21st at the first annual San Jose Stoner Rock Festival. Hosted by the Back Bar and Nemesis Media, the SOFA district will rumble with each band bringing their distinct style of Stoner/Doom/Psych/Heavy rock to South Bay fans for the first time. ZED is ecstatic to have the chance to collaborate with Nemesis Media to put together and participate in this unique musical experience.

Mothership, Slow Season and Blackout will be in town, fresh off their appearances at Psycho California, the 3-day mega festival that mixes the genres of stoner rock, doom, heavy psych, sludge, post rock, hardcore, experimental and black metal.

ZED, from San Jose, signed with Ripple Music last October and are currently writing their debut for the label, due out early next year. Forgotten Gods, also from San Jose, are a South Bay mainstay treading the waters of heavy prog and stoner/psych.

Mothership:
Supersonic intergalactic heavy rock trio Mothership based out of Dallas, Texas give a real sense of hope that all is well in the universe, and that pure honest rock and roll has once again returned to this planet on a mission to unite true believers. Consisting of brothers Kyle Juett on bass/lead vocals, Kelley Juett on guitar/vocals, and Judge Smith on drums, these guys have created a unique sound that satisfies like a steaming hot stew of UFO and Iron Maiden, blended with the southern swagger of Molly Hatchet and ZZ Top, paired with a deadly chalice of Black Sabbath. Mothership’s goal from the beginning has been to carry on the tradition of the classic rock style of the ’70′s, updated and amped up for the modern day. The band has been non-stop road warriors since the release of their debut album in February 2013 on Ripple Music successfully invading the United States, Canada, United Kingdom and Europe playing either on festival stages, night clubs, or outdoors under the sun at motorcycle parties.

ZED:
Blasting onto the San Francisco Bay Area rock scene in 2007, ZED quickly made a name for themselves with their crushing live shows and incessant grooves. Having played together in various projects since 1998, including releasing an album with the band Stitch for Prosthetic/Metal Blade Records, Guitarist/Vocalist Peter Sattari, drummer Rich Harris and bassist Mark Aceves joined up with guitar wizard Greg Lopes to create a sound that was uniquely their own, a sound whose sole purpose was to rock, with no concern for genres, labels, classifications or rules. Drawing from their varied influences ranging from classic ’70s rock, punk/hardcore, metal and old school funk, ZED writes music that grabs you, throws you around and grooves you all at once. The band has been likened to “a pissed off Led Zeppelin with Chris Cornell meets Ian Astbury on vocals,” ZED writes songs that linger in your head long after you listen to them. ZED independently released their sophomore album Desperation Blues in May of 2013, which garnered critical acclaim as well as charting on CMJ throughout the summer. Supporting the album up and down the west coast, ZED has played consistently through the fall of 2014 where they are now focusing on writing their follow up to Desperation Blues which is also their debut for Ripple Music. ZED is excited and proud to be joining the Ripple Music family and look forward to making heads bob and asses shake in 2015.

Slow Season:
Press “play” on Slow Season‘s second full-length album MOUNTAINS, and you might just forget what era you’re in. It could very well be the sixties, seventies, or now. It almost doesn’t matter though because this is hypnotic, heavy, and howling rock ‘n’ roll that defies both musical and temporal categorization. The Central California quartet – Daniel Rice (vocals, guitar), David Kent (guitar), Hayden Doyel (bass), and Cody Tarbell (drums) – scale new heights, while recognising where it all began. “I’d love for people to wonder if this record is actually from 1969,” grins Cody. “We wanted to capture that spirit. That was the goal.” In order to do so, the musicians holed up in Cody’s home studio, which actually doubles as his parents’ garage, and cut Mountains ten tracks throughout the course of early 2014. Hayden had just returned home from a short detour at college in Idaho before recognizing he belonged jamming with his brothers. Officially back in the fold, excitement to record proved pervasive. Moving when inspiration struck, they actually recorded the songs live on reel-to-reel tape. Eschewing the digital mindset of today and not even uttering the words “Pro Tools”, everything was caught on analog, giving the music a crackling kinetic energy.

Blackout:
With food, beer and America at the forefront, it only makes sense guitar player/vocalist Christian Gordy and drummer Taryn Waldman would meet at Gordy’s 2011 July 4th cookout in the Bushwick neighborhood of Brooklyn, New York. Waldman, a former Hooter’s waitress turned big time commercial film editor; and Gordy, a one-legged bartender/artist/BBQ enthusiast were an oddball couple for NY’s rigid metal scene. With no direction and zero discussion the two instinctually began banging out some massive caveman jams that could party as much as they could crush. In the following months, the two recruited fellow rager and gun shot wound victim, Justin Sherrell, for bass duties… and things got loud and heavy. BLACKOUT — referring to blackout drunk, power failure, or a mobster hit on an entire family — was a no brainer of a name.

In November 2012 BLACKOUT recorded their debut LP, ‘We Are Here’, at Vacation Island studio with engineer/producer Rob Laakso (Diamond Nights, Swirlies, Kurt Vile). The band self released the record on vinyl/digital in 2013 to a widely accepting audience, and even garnered praises from the some of the hottest blogs du jour. The band has been gigging around the NYC area for it’s 3 year existence but has ventured to Canada, Maine, Philly, Providence and Austin, sharing the stage with acts such as Acid King, Weedeater, Trouble, and more.

During the summer of 2013, the band began working on a new body of songs… strictly working off riffs spontaneously summoned during practice. Lots of things were chucked, then rediscovered, then tossed again, recycled etc. What you have now in 2014, is the newest record from these mom approved hooligans, appropriately self titled ‘Blackout’. In September, the band was invited to join the killer lineup of Riding Easy Records, who will release the album in early 2015. The band is continuing on an upward journey to the pillar of rock and roll righteousness and is ready to take on the world. you have been warned.

Forgotten Gods:
Forgotten Gods is a stoner/doom rock band from San Jose, CA, formed in early 2011. Pete Rice (Janitors Against Apartheid, Vector Hold) and Kevin Swartz (Bottom, Burning Monk, Infinite Waste) met up initially just to jam. When it became clear that the project had potential, Dave Stoltenberg (Slick Shoes, House of Doors) joined soon after to complete the trio, and Forgotten Gods was born. Claiming influences such as Black Sabbath, Sleep, Mastodon, Baroness, and The Sword, Forgotten Gods soon released an EP in 2012 and has been performing relentlessly ever since. The band’s debut album “Fall of the Dagger”, recorded at GetReel studios in San Francisco, was released in December of 2013. Their sophomore album, to be recorded with Tim Green at Louder Studios, is scheduled for release in summer 2015.