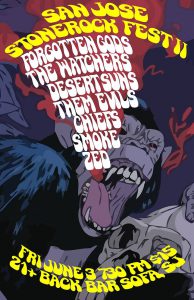 Check out this years lineup!
From Phoenix AZ and on BattleGround Records hails CHIEFS , whose album “Tomorrow’s Over” was called “the perfect love-letter to bands past and present within the Desert/Stoner Rock scene” by The Sludgelord

From San Diego and on HeviSike Records / Ripple Music comes Desert Suns whose Self Titled album was described as “Fans of early 70s proto-metal acts such as Black Sabbath, Deep Purple, Steppenwolf and Blue Cheer will appreciate the classic
groove demonstrated on this record, as will followers of modern stoner rockers Fu Manchu, Kadavar, Graveyard and Clutch.” by The Sludgelord

From the SF Bay Area comes The Watchers, a new super group of sorts featuring ex-members of Orchid, SpiralArms and The Venting Machine!

From San Jose, is both Zed and Forgotten Gods.
ZED recently finished recording their third album, and their first for Ripple Music who will release it later this summer, and Forgotten Gods just released their latest album, Twin Sisters, on Vinyl which the The Ripple Effect said “Forgotten Gods have a knack for crafting deliciously groovy, heavy, riffy changes of tempo, in all seriousness, every song here seems to have a section that gets my hands air-guitaring and my head bobbing with a giant grin on my face.”

and from Huntington Beach, Them Evils bring their raucus brand of rock and roll to the South Bay for the first time!